The equinox was a week and a half ago, which means the end of the first full summer for this project. Last summer, I posted the first set of photos in what I thought was going to be a one-year effort. In retrospect, it was ridiculous that I thought I’d be able to finish this project in one year. I’ve often been accused of being far too optimistic (usually regarding the outcome of elections), but to think I could do this in one year seems amusing in retrospect. Of course, that doesn’t stop me from thinking I could have easily done it if I didn’t have to worry about my job, my house, my novel, my. . . . . . 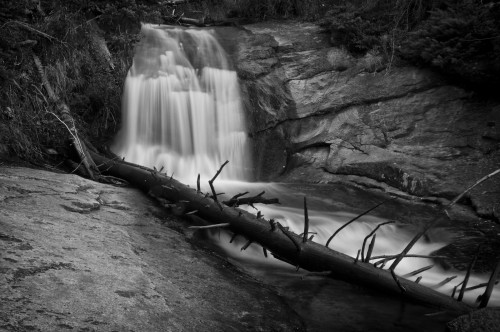 West Creek Falls has to be one of the better secrets of Rocky Mountain National Park. It’s hidden away on the eastern border of the park, though the hike to visit it isn’t particularly long or strenuous. The double falls create two idyllic pools that looked so appealing, except that the temperature soon after sunrise was just above freezing. As a mid-July afternoon destination, however, they would be perfect for a cooling soak, washing the dust and sweat eastward to the Gulf of Mexico.

With my visit to West Creek, the first time I’ve ever been to these falls and on the same day as my recent visit to Bridal Veil Falls (and the run-in with the irate hunter), the first full summer of my project ended. Of the thirty-one named waterfalls, I’ve now photographed twelve. That seems rather depressing. A 39% completion rate. Whoa. On that note, I am going to publish this and make for an early night because tomorrow morning, I will be on the trail again, shooting seven different falls out of the Wild Basin Trailhead, which will bring my Autumn total nearly to that of the summer. At least, that’s what the optimist in me thinks.